One store in a chain of supermarkets was under-performing. The point-of-sale (POS) figures showed that people using this supermarket bought less items than shoppers elsewhere. Why was this? And what could be done to bring the store in-line with the others?

To find out what was going on the store chain directors installed a Smart Retail Sensing System and started amassing retail intelligence.

They knew the store was busy – the POS system told them how many shoppers there were. But they needed more than just people counts. The Retail Sensing system told them, amongst other things, the Average Shopping Time for the entire store and different departments within the store. It also showed where queues were forming and for how long, plus the path people took through the store.

When Retail Sensing analysed the data the “problem” was clear: the supermarket butcher was fantastic.

People were going straight to the fresh meat counter. As the butcher was so good they were prepared to queue for his advice and attention, spending an average of 10 minutes doing so.

The queuing didn’t stop there. Customers also waited ten minutes at the checkout. The average shopping time for the whole store was around 30 minutes which meant that customers gave the same time to buying fresh meat as they did to all their other shopping combined.

When compared with other stores in the goup this showed in the basket makeup. The average meat share at this supermarket was 18%, in other stores it was just 12%. If the store could get the ratio to a similar level, without sacrificing meat sales, profits would rise.

The Solution: Acting on the Data

How to do this? On the advice of the Smart Retail Sensing consultants they experimented with two complimentary measures. Firstly the store set up a ticket-based system for the meat counter. As soon as people entered the store, signs invited them to take a numbered ticket to see the butcher. When their number was called the butcher was ready for them. This meant that they could do other shopping whilst waiting for their turn.

The second change was in the layout of the shop. Moving different departments – fruit and vegetables, dairy, cleaning products and so on – so customers had to walk down these aisles to make their way to the butcher. Different arrangements were tried on different weeks and data analysis revealed the optimum layout for increased sales.

Changing the path people took through the store and reducing their queuing time is resulting in many more items being bought on each visit. The people still come in to buy their meat, but now also have time to buy their other groceries as well.

The key to solving the case of the missing grocery sales was monitoring the queuing times, the shopping path, how long people spent in key areas and, above all, the Average Shopping Time. 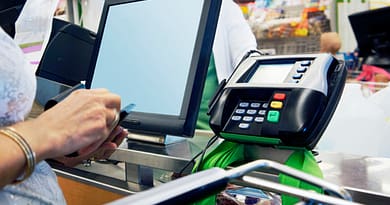 Revealed: how to reduce queuing time by 89%

How long does it take to lose a customer: reducing queues and increasing sales